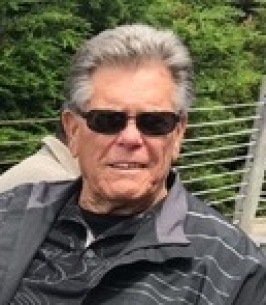 Print
OBITUARY :
GARY NERLAND
April 3, 1937 - July 10, 2019
Gary passed away at the age of 82 at his home in Riverbank, where he had lived in the house
that he built in 1971.
Gary was born in Brooten, Minnesota to Gaylon and Gloria Nerland. The family moved to
Stockton, California during the war years and Gary attended grammar school, high school, and
Stockton Junior College there.
Gary was employed in the Engineering Department of Gallo Winery prior to his co-ownership of
Ward-Schmid Boiler Company. Gary retired at the age of 74, after selling his business to
California Boiler, where he remained until his retirement.
Gary was a member of the California National Guard. His unit was activated during the Berlin
crisis and he spent one year at Fort Ord. Gary was a member of SIRS and enjoyed weekly golf
with his buddies Scott, Glen and Dennis. Gary was a devoted husband, father and
grandfather. Spending time with his family was what he enjoyed most. He was adored by his
sons and grandchildren and deeply loved by his wife. He especially liked the dinners at home
with his family around him. His “hobby” was spending countless hours in his half-acre lot. It
seemed the yard work was never done!
Gary is survived by his wife, Sandra, sons, Cristopher (Michael), Michael, Matthew, grandson
Alec (Aaliyah) and granddaughter Ashley, brother Wayne Nerland (Elaine), and sister Marcia
(Ron) Cameron.
Gary will be missed by his family and friends.
A private gravesite service will be held at Park View Cemetery with a Celebration of Life held at
a later date. In lieu of flowers memorials may be made in his name to Community Hospice,
4368 Spyres Way, Modesto, CA 95356.

To send flowers to the family of Gary Charles Nerland, please visit our Heartfelt Sympathies Store.

We encourage you to share any memorable photos or stories about Gary. All tributes placed on and purchased through this memorial website will remain on in perpetuity for future generations.

Provide comfort for the family of Gary Charles Nerland by sending flowers.
Send Flowers
next page >>
Page 1 of 0
Share
×