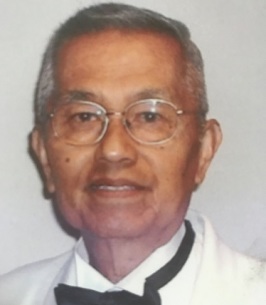 Share this tribute
Memorial Candles Lit for Pete Padron | SEE ALL
Light a Candle
"We are honored to provide this Book of Memories to the family."
— Park View Funeral Home
"You are at peace now. May Perpetual Light shine upon you and May you Rest In Peace. You will be missed. Say Hi to Maria "
— Rose Sy
"We miss you so much already. Rest in peace. Love Madison, Savannah, Dwight, and Lori "
— Madison Jackson
Funeral Details Memory Wall Photos & Videos Send Flowers

Print
Pantaleon “Pete” Padron passed away peacefully in his home Friday, November 22, at the age of 85, after complications from a recent fall.
Pete was born in Spreckelsville, Maui, the son of Filipino immigrants Manuel Padron and Florencia Madamba. He attended Maui High, and later Delta College. He joined the US Army in 1956, and spent the next 21 years as a Food Inspector. He was stationed in Bordeaux, France, where met the love of his life Maria Casanova, on a blind date in Madrid. They were married for 49 years, until Maria’s untimely passing in 2008. After the birth of their first daughter Florence in 1960, Pete was transferred to Oahu, where their second daughter Jennifer was born in 1963. In the early 70’s, Pete had assignments in Denmark, Romania, and the Presidio, before finishing his military career in 1977 at the Tracy Defense Depot. Pete bought a home in Manteca in 1976, where his daughters attended East Union. After military retirement, Pete worked at the Tracy Defense Depot as a Quality Auditor until 1994. He and Maria were active members of St Anthony’s Catholic Church since 1976, and prominent in the St. Vincent De Paul Society, Young Men’s Institute, and Knights of Columbus.
He is survived by his daughter Jennifer of Atlanta, brothers Jose (Luisa) of Honolulu and Juan (Margaret) of Las Vegas. He was preceded in death by his wife Maria, daughter Florence Baker (Scott) of Petaluma, and brother Flor (Louella).
A funeral mass will be held for Pete at St. Anthony’s Catholic Church in Manteca at 11:00 a.m, Friday December 6, and preceded by a viewing at 10:00 a.m. An internment with Military Honors is scheduled at St. John’s Cemetery in Escalon after the funeral mass. A reception at Chez Shari (at Manteca Park Golf Course at 305 N. Union Road) will begin at 1:00 p.m. A rosary will be held at Park View Memorial Chapel, at 3661 French .Camp Road, Manteca at 5 p.m on Thursday, December 5. In lieu of flowers, the family asks that donations be made to the St. Anthony’s St. Vincent De Paul Society.

To send flowers to the family of Pete Padron, please visit our Heartfelt Sympathies Store.

We encourage you to share any memorable photos or stories about Pantaleon. All tributes placed on and purchased through this memorial website will remain on in perpetuity for future generations.

You are at peace now. May Perpetual Light shine upon you and May you Rest In Peace. You will be missed. Say Hi to Maria
Rose Sy - Monday November 25, 2019 via Memorial Candle
Share This:

We miss you so much already. Rest in peace. Love Madison, Savannah, Dwight, and Lori
Madison Jackson - Monday November 25, 2019 via Memorial Candle
Share This:
EG
REST IN PEACE my dear friend and know that you will be greatly missed by all your friends.
Elaine Gumaer - Sunday November 24, 2019 via Condolence Message
Share This:
1
Page 1 of 1
Share
×

Share on Facebook
Send flowers to the family
Choose from beautiful standing, table and basket arrangements. Safe and secure online ordering.
View Flower Arrangements
What has already been purchased for the family?
Plant a Tree in Memory of Your Loved One
An Honouring a Life memorial tree is a unique tribute which provides global benefits like no other memorial gift could.
Plant a Tree
Family Log-In