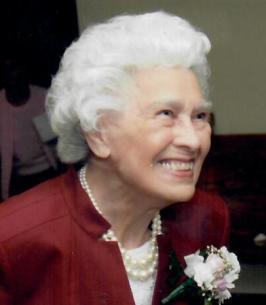 Share this tribute
Memorial Candles Lit for Ella | SEE ALL
Light a Candle
"We are honored to provide this Book of Memories to the family."
— Park View Funeral Home
"Ralph so sorry for your loss. "
— Loretta Perkins
Funeral Details Memory Wall Photos & Videos Send Flowers

Ella K. McChesney, age 101, passed away peacefully at her home in Manteca on Christmas Eve following a brief illness. This was the same residence that she had continuously owned and occupied since the Spring of 1946. Born in North Dakota, Ella was one of nine siblings of German heritage in which speaking German was their primary language. Her parents, Henry and Kathryn Wolf, were European immigrants that came to America and settled in North Dakota in the early 1900s. Together as a family, they farmed over 500 acres for many years raising cattle and wheat along with other farm products to sell. Ella came to California in 1944 during World War II to visit her brother and his family in Stockton. Instead of going back to North Dakota, she decided to stay and seek employment. As fate would unfold, it wasn’t long after this that she met the love of her life, Ralph N. McChesney, Jr. when she was working as a civilian at Stockton Field and he was stationed there while serving in the United States Air Force. They married in early 1945 and were inseparably together until Ralph’s passing in late 1999. Ella was an active member of St. Paul’s United Methodist Church in Manteca since first moving to Manteca. In the early days, she was a member of the Manteca Women’s Service Club doing charitable and community work. From 1962 to 1993, Ella worked in downtown Manteca at the Brown-Mahin Department Store. She most notably worked upstairs in the domestics and yardage department, but also spent many days working downstairs in the lingerie department. Ella is best known and remembered by her kind and warm personality, soft spoken voice, smooth facial skin, soft silver hair and a genuine smile which was enhanced with that continuous twinkle in her eyes ever so evident while both listening and speaking. Amongst her family, Ella is remembered as being the most giving and loving mother and grandmother in which she would do anything and everything for. Her family always came first. This includes being close to and spending time with her three brothers in Stockton and the five other siblings out of state. Throughout her entire life, Ella was very energetic, organized and creatively talented. There were so many things that she could do and make. Everything was done with absolute perfection. This includes – but certainly not limited to – working in her kitchen while cooking and/or baking anything and everything using old-school recipes and nothing but all-natural ingredients; sewing many of her own outfits for herself as well as her daughters and granddaughters; gardening in her yard; taking care of her house and much more. Her charm and inspiration automatically transpired to all that knew her. It is without a doubt that she lived a full and happy life with the disposition that she never wanted to get old or slow down. She never let her advancing age over the years ever bother her as she always remained young in heart. Ella stayed active every day – even at 100 years old. She didn’t think twice in taking on large projects such as making her own dress for each her grandchildren’s weddings even though, at the time, she was in her mid to late 80s. In addition, after her retirement from Brown-Mahin beginning at the age of 75, she always was frequently seen by passing motorists in Manteca as she regularly walked two miles a day in the morning. This continued until around age 94. She always did her own grocery shopping as she drove around town well into her 90s. Ella was still cooking until her late 90s. It was a tradition that every single Sunday morning she always made fluffy homemade buttermilk pancakes topped with real butter and syrup. She famously would continue to bring her trademark homemade cakes, pies or delicious gelatin dishes made with real fruit to each family gathering. This tradition of hers lasted well into her 90s. Ella always planned and looked forward to attending live music performances. This included patronizing the Manteca Kindred Arts as well as seeing several different shows at The Gallo Centre in Modesto each year. Even in year 2019, she attended two different performances at the age of 101 years. She was appreciative and proud to be able to live in and enjoy the comfort of her own home right up until her passing. She never wanted to live anywhere else. Ella was preceded in death by her husband of over 54 years, Ralph Jr., and leaves behind four children: daughters Sandra Ross (Ronald), Cynthia Darling (Alan), and Joyce Arcieri, and her son, Ralph, III. She also leaves behind seven grandchildren and ten great grandchildren.
A service and burial are planned for Friday, January 3, 2020 beginning at 1:00 p.m. at Park View Cemetery & Funeral Home, 3661 E. French Camp Road, Manteca, CA 95336, (209) 982-1611. Donations may be made in her honor to either: St. Paul’s United Methodist Church, 910 E. North Street, Manteca, CA 95336; Hospice of San Joaquin, 3888 Pacific Avenue, Stockton, CA 95204; or the charity of your choice.

To send flowers to the family of Ella Kathryn McChesney, please visit our Heartfelt Sympathies Store.

We encourage you to share any memorable photos or stories about Ella. All tributes placed on and purchased through this memorial website will remain on in perpetuity for future generations.

Ralph so sorry for your loss.
Loretta Perkins - Thursday January 02, 2020 via Memorial Candle
Share This:
GC
Someone so special can never be forgotten. My condolences to the family...
George Clausing - Wednesday January 01, 2020 via Condolence Message
Share This:
1
Page 1 of 1
Share
×

Share on Facebook
Send flowers to the family
Choose from beautiful standing, table and basket arrangements. Safe and secure online ordering.
View Flower Arrangements
What has already been purchased for the family?
Plant a Tree in Memory of Your Loved One
An Honouring a Life memorial tree is a unique tribute which provides global benefits like no other memorial gift could.
Plant a Tree
Family Log-In