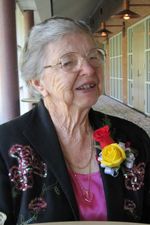 Harriet grew up and went to school in San Leandro, CA, moving back to Stockton with her family in 1936. She attended College of the Pacific, graduating with a degree in math and speech therapy in 1940.

She met Paul K. Judson Jr. at the only USO dance she ever attended and they were married on March 12, 1944 at First Congregational Church of Stockton. During WWII she worked in the Finance office at Stockton Field. She and Paul built a house on Edison Street in 1947 and she lived there for 67 years before moving to Plymouth Square.

Harriet and Paul had one daughter who was the apple of their eyes.

When Plymouth Square was built in the late 1960s, Harriet immediately became a volunteer. When their daughter was in college, she began working at the front desk on weekends, later transitioning to weekdays and then she became the administrative assistant. She loved showing apartments and visiting with the residents. She also worked for 2 years at Wagner Heights before retiring at age 72.

Harriet was an almost life-long member of First Congregational church of Stockton, UCC, and a 50-year plus member of AAUW and Philomathean Club. She loved to play bridge, sew clothes for herself and Sue. She and Paul were always willing to help with anything at church or other organisations that needed doing. She also loved cats, writing poetry, communicating with people by telephone, letters and email, and was an avid San Francisco Giants fan, listening to every game on her little transistor radio, right up to the end of the 2019 season.

Harriet was preceded in death by her parents, Edward and Ann Kientz, her brothers, Don and Bob, sisters-in-law, and her husband, Paul. She is survived by her daughter Rev. Sue Judson Hamly and son-in-law Rowland Hamly of International Falls, MN, granddaughter Veronica Hamly of Coralville, IA, granddaughter Courtney Murray and grandson-in-law Robert Murray and great-granddaughter Lyra Murray of Maple Grove, MN, and her niece and nephews and their families.

All rights reserved. This obituary is also archived at obittree.com