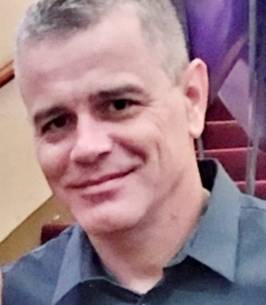 Print
Shane Steven Pliler (48) passed away unexpectedly in his home in Stockton, CA, on January 16, 2020. Date and time of memorial service in Iowa will be announced later.

Shane was born in Des Moines on November 13, 1971, to Charles (Steve) Pliler and Gisela Pliler (Veatch). After he graduated from Bondurant-Farrar Highschool, Shane joined the US Navy. During his eight years of service, he spent many months underwater as a nuclear electrician on a submarine. He married April Smith of Mitchellville in 1991. The couple resided in Florida, New York State, and Washington State during the Navy years, and eventually moved to California. Shane continued to work as an electrician throughout his adult years.

As a child, growing up in Bondurant, Shane enjoyed playing soccer and baseball. He joined the basketball team in highschool, and participated in track and football. Shane played the trumpet with the highschool band, and was a member of the honor band. As an adult, he qualified to play on a Navy basketball team. He also enjoyed golfing, softball, and hiking. Shane loved dogs. His dog companions included a German Shepherd named Einstein, a Great Dane named Demetrius, and a Dachshund named Vienna, among others.

Shane had a strong faith in God. He accepted Jesus Christ as his Saviour at a young age. He attended Altoona Regular Baptist Church during his childhood and teen years, where he was a member of Awana Club, the youth group, and participated in church plays. Shane continued to attend church after he moved out of Iowa. He studied the Bible and prayed faithfully. He also has served as a youth group leader.

Shane is survived by his Mom; his brothers, Jeff Pliler (Sarah) of Altoona, and Greg (Desiree) Pliler of Polk City; his grandmother, Pat (Bob) Lagers of Joplin, Mo., his nephew, Brandon (Jenny) Pliler, and their children, Bentley and Emery, of Clive; his nieces, Victoria Pliler of Des Moines, and Brooke and Meadow Pliler of Polk City, and his dog, Vienna. He was preceded in death by his father; his grandfather, Silas (Ray) Pliler; his grandparents, Oskar and Alice Oschmann of Germany; and his twin nieces, Emery and Alexsis Pliler.

Shane will be greatly missed, and held dear in our hearts always.

To send flowers to the family of Shane Steven Pliler, please visit our Heartfelt Sympathies Store.

We encourage you to share any memorable photos or stories about Shane. All tributes placed on and purchased through this memorial website will remain on in perpetuity for future generations.

Provide comfort for the family of Shane Steven Pliler by sending flowers.
Send Flowers
C
Shane you will be greatly missed by all . I remember the first day I met you at gallo on line 13 . You taught me a lot in the years you were there . Plus we became great friends. Thank you for our friendship . I will miss you dearly. Love you Friend Chenoa
chenoa - Sunday January 26, 2020 via Condolence Message
Share This:
1
Page 1 of 1
Share
×